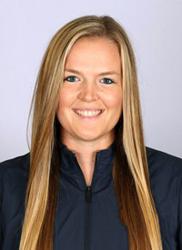 "Tess has an enthusiasm about teaching the game of softball that will bring instant energy to our program," said Perry. "She has worked with some of the best in the game and will be a great resource for our pitchers and catchers."

Soefje will be primarily responsible for catchers. She also will assist with all aspects of pitchers in bullpens, hitting, and defense. She also will have responsibility for scouting reports.

Soefje also will coordinate all player camps and clinics for the Illini softball program throughout Illinois and the country.

Soefje is the original American Freedom player and has been an integral part of the growth and success of organization from its inception in 2006. She served as an assistant coach for the American Freedom Gold (Soefje) in Dallas/Ft. Worth, Texas for five years.

Soefje comes to Champaign following two years as a graduate assistant with the Ole Miss softball program, where she assisted in daily bullpen development of pitchers and catchers, mentored players in all aspects of mental preparation for game.

She also coordinated apparel and equipment management, assisted with the director of operations on game day and recruiting events, and assisted in management of team travel.

A three-year starter behind the plate for the University of Texas -San Antonio, Soefje started 152 games during her career and registered 20 career home runs. She started her collegiate career at the University of Houston, where she saw action in 15 games as a freshman

She finished her career as the NCAA Division I hits-by-pitch per game record holder (.54 per game). She also was named an NFCA All-American Scholar and to the Conference USA Honor Roll at both UTSA and Houston.

Last summer, she coached with the 18u United States team for USA Athletics International that competed in Italy.

Soefje played professionally this summer for Mob-BEEL USA in the inaugural American Softball Association (ASBA).  She started 17 of 29 games behind the plate for Moh-BEEL USA, which won the regular season before losing in the Championship Game. Soefje was voted on to the ASBA All-Star Team. She also set the ASBA league record with 14 HBPs.