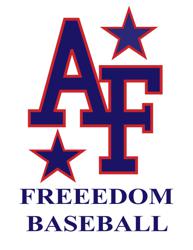 The American Freedom Baseball Club is proud to announce the launch of its inaugural season under the leadership of long-time Dallas/Ft. Worth hitting and fielding instructor Rone Robinson and co-founder Michael Lastovica.

We are excited to announce that the inaugural American Freedom Baseball Club 10u tryout was a huge success! So much, we decided to do it again. Spread the word. Looking to fill a couple of positions with serious, skilled, young men who want to compete at a high level.
Date: Nov 21
Location: Premier Prospects in Lewisville TX
Time : 3-5
Contacts: Michael Lastovica 281-725-3705 or Rone Robinson 214-334-5019. Please contact Michael Lastovica at AFBaseball.Lastovica@gmail.com. or Rone Robinson at americanfreedombaseball@gmail.com

We are looking to fill a few positions and are looking for dedicated hard working players. The team will be based out of the Little Elm/Frisco/Lewisville area. The official launch in January 2016.

Coach Robinson is a former standout shortstop for the University of Louisiana Lafayette. He played professionally for the Carson Crawdads in California before become an NCAA Div. I college coach with the University of North Texas softball program.

We are building a baseball organization based on respect, discipline and skilled fundamentals. On the American Freedom, you can trust that you son will have every opportunity to develop his athletic skill to highest level against the best competition, but also will learn the true meaning of teamwork, loyalty and personal responsibility.

"To compete as a national-level program committed to helping every player who remains committed to our philosophy get recruited to compete in college at the 'right fit' for that player without regard to division of play."

In short, we believe we can be successful at the national level AND remain loyal to our players; committed to player development; and successful at college recruiting that makes sense for our players and their families.

We believe the key to long-term sustainable success is building teams and developing the players on our roster, not just recruiting and managing new players. We will stick with our players who remain fully committed to our goals, and not simply try to recruit another, better player to replace you as soon as we have talked you into joining our roster.