The American Freedom Gold will compete in the 18u Gold 2015 PGF Platinum National Championships to be held July 24 through July 31 in Huntington Beach, California.

The American Freedom Softball program again will be among the few travel clubs in the nation with two or more teams competing at the PGF National Championships in any age group.

The AF Gold finished tied for 5th Place at the 2014 PGF Platinum National Championships, going 8-2 for the week against some of the strongest teams in the nation.

The 2015 Triple Crown/US College Player Index (CPI) ranks the AF Gold No. 9 nationally and No. 4 in Texas. The BCS-type poll tracks the nation's top travel clubs' actual placement of players in NCAA Div. I and II college programs during the last five years.

The poll ranks the AF Gold as the No. 53rd ranked 18u Gold team overall based on its finish in national events last year and the fall of 2014.

The AF Gold was ranked No. 42 on the 2013 year-end College Player Index, including No. 8 in Texas. The American Freedom remains among the youngest programs in the national Top 50. 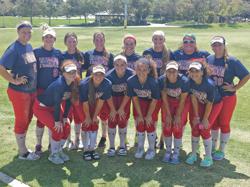 In 2014, the AF Gold was the only Texas team playing at PGF on Friday after winning six games in a row over three days, including four games on Thursday. The AF Gold ran out of magic in the quarterfinals, losing to the Central California Dirtdogs 7-1.

Ms. Guffey was a workhorse for the AF Gold all week, recording 5 wins and posting a combined 3.00 ERA, while making appearances in 9 of 10 games. She struck out 43 batters, issued only 16 walks, and scattered 55 hits in 53 total innings.

The AF Gold took a decisive 14-13 extra-innings win over the CA Shockers in the second round of bracket play to sparked their run through the tournament.

After going down 7-2 early in the game, the AF Gold responded with 3 HRs and 19 hits to rally thanks in part the team believed to a little magic purple Gatorade in the dugout.

In her last official at bat in an American Freedom uniform, Senior Morgan Catron (2014, OF, McNeese State) capped the win by blasting a 2-run HR in ITB to put the AF Gold ahead for good.

The AF Gold lost to CA Fury in a rematch after the AF Gold beat the Fury in Colorado Fireworks (Super 64) bracket play earlier in the summer. The AF Gold eventually were eliminated by the CA Dirtdogs.

The American Freedom Gold hit a solid .300 as a team in the PGF tournament, including slugging 7 HRs and 17 doubles. The AF Gold scored 52 runs in 10 games, only six of which were unearned 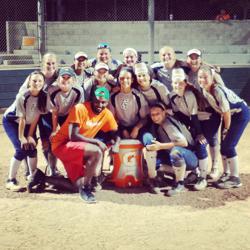 Other offensive superlatives came from: